More information on microservices can be found on Martin Fowler’s Blog on Microservices.

With microservice architectures, dependency on a network becomes quite key and raises reliability questions. As the number of services increase, you’ll find that you have to deal with the interactions between them, monitor the system-wide health (across all services), the network should be fault-tolerant, have system-wide logging and telemetry in place, handle multiple points of failure, and a lot more. All the services need to have these common functionalities in place to allow smooth and reliable service to service communication. This is where Service Mesh implementation comes in handy.

What is a Service Mesh?

A service mesh is an extra layer that allows different services to share data amongst themselves, and in turn, should reduce microservice complexity. Unlike other solutions that manage inter-service communication, a service mesh is a dedicated infrastructure layer that is built right into an app (sidecar pattern).

Why do we need a Service Mesh?

Interservice communication is one of the most challenging aspects of microservice architectures. Netflix being a notable success story within the implementation of microservice architectures have contributed a wealth of resources to tackling the affair mention problem, examples being eureka(service discovery), cloud sleuth(distributed tracing), ribbon(load balancing) and many more. However, most of these tools are language-specific.

Before we move into actual solutions and implementations of service meshes we need to understand what Envoy role is in cloud-native architectures and just generally the fuss around it.

Envoy is an OSI Layer 7 proxy & communication bus that has been designed for large modern service-oriented architectures.

Envoy project started out at Lyft sometime in 2015, as mentioned in their blog, the company was struggling to stabilize its rapidly growing microservice distributed architecture at the time. After its adoption Envoy quickly became an integral part of the scaling of Lyft’s architecture. Soon after envoy was released as OSS and saw a large growth in the community.

How is Envoy used?

A sidecar proxy is an application design pattern that abstracts functionality that is not key to the business logic away from the main services to ease the tracking and maintenance of the application as a unit, these include;

A sidecar proxy is by default attached to a parent application to extend or add functionality hence the name sidecar.

As mentioned envoy is widely used to implemented sidecar proxies in most production implementation this can be attributed to a host of reasons, among the top being its Extensibility, evident from the existence of multiple extension points as well as its Rich configuration API, just to mention a few.

At this point, let’s see How to pull all this together using and deploy using consul.

Consul comes with a simple built-in proxy to allow rapid out of the box configuration, it however also supports 3rd party proxy integrations such as Envoy. 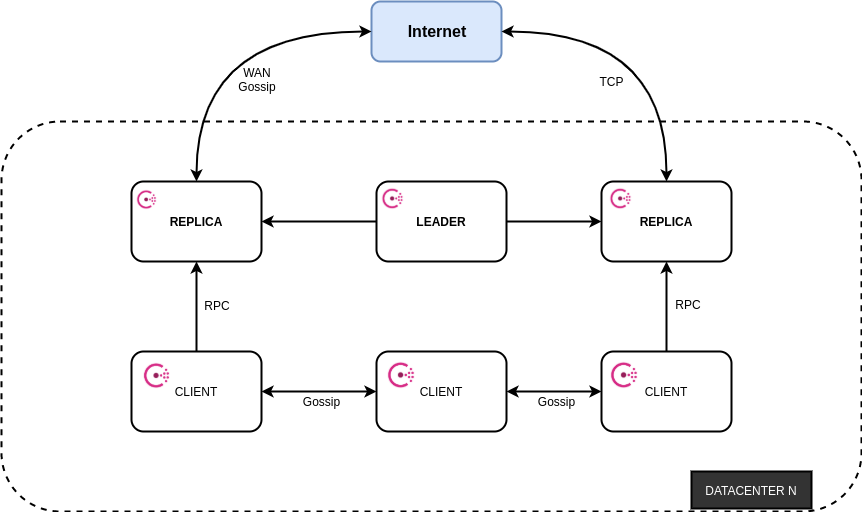 As seen from the above image we have a mixture of clients and servers within the data centre. It is expected that there should be between 3-5 servers. This balances out availability in the case of failure and performance since the consensus algorithm gets progressively slower as more nodes are added. There is no limit however to the number of clients you can have. The default architecture works by using the raft algorithm, which helps us in electing a leader out of the three different consul servers. 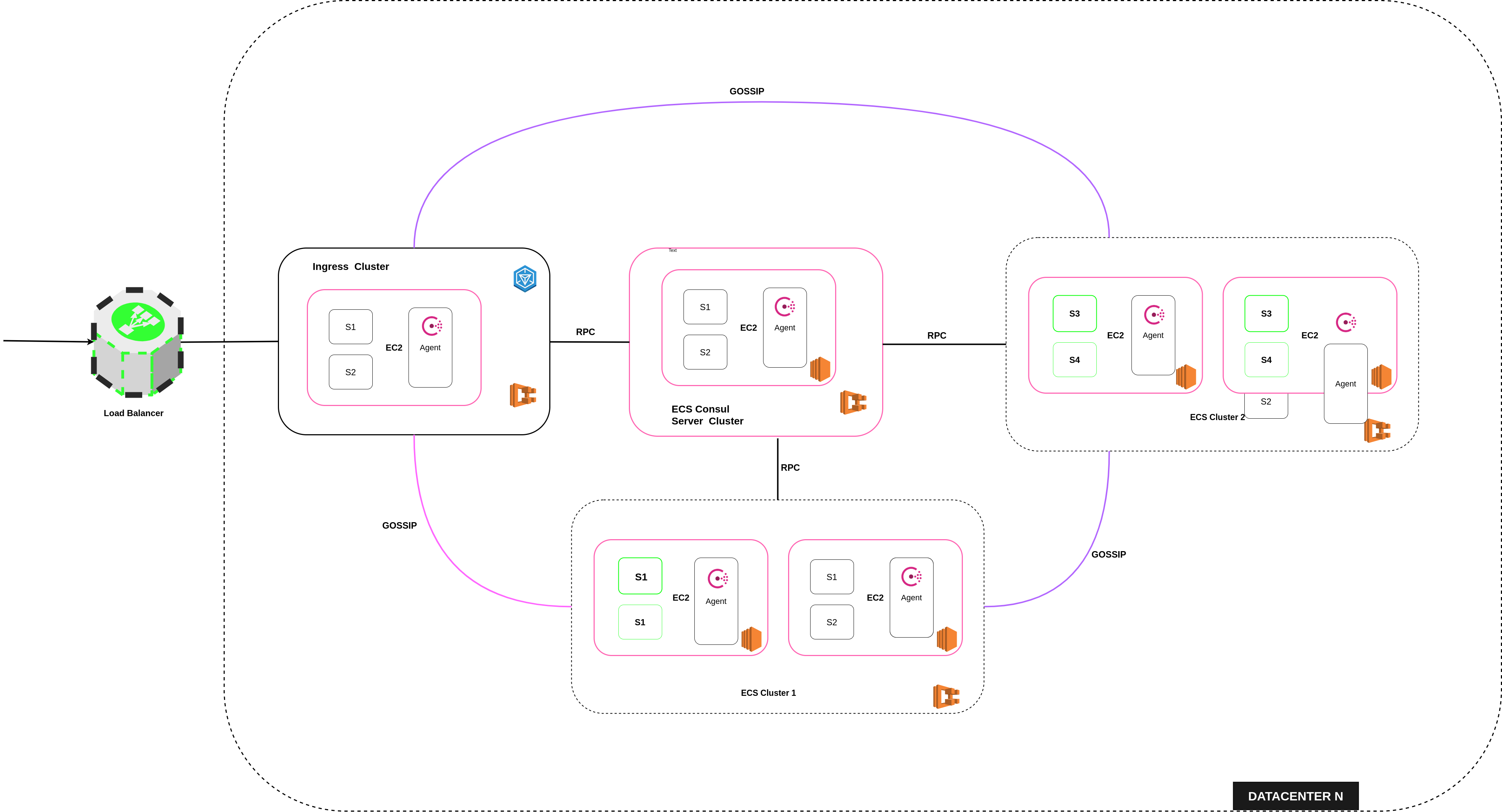 The pattern follows a multi-cluster deployment scheme implemented on top of Amazon ECS.

ECS is the AWS container service that handles the orchestration and provisioning of Docker containers.

This step by step guide will require knowledge in setting up ECS clusters For more information on cluster creation and configuration refer to this tutorial on Medium by Tung Nguyen.

The project has 4 services implemented in spring-boot, these are dockerized to allow deployment on the proposed architecture. The services are language agnostic and can be implemented in any framework/language of choice.
According to the architecture diagram Cluster 1 & Cluster 2 run 2 services each. The clusters each run an extra service i.e. the consul agent.
The deployment has a cluster dedicated to the ingress gateway and another for the server instances.

We should create and configure 4 ECS clusters

note that this takes a multicluster approach, you don’t have necessarily to run it as explained there are plenty of other approaches to consider. Using resources as defined in this guide can be quite costly to mantain, hence ensure that you subscribe to the AWS free tier if you are using this tutorial for learning purposes.

Once the Consul Server Cluster is created we should now define the consul-server-service.
First things first we need to have the consul server image on ECR.
We’ll define a custom consul image that embeds envoy proxy that consul uses to implement the sidecar on.
below is a sample customized Dockerfile of this.

Consul can run as server or agent depending on initialization config i.e. server=true

below is the config file loaded as the service starts up.

Consul will communicate to agents on the eth0 interface which provides host IP on the registered vpc this is evident from;

It is crucial to ensure that you run the task in host network mode or use vxLan to allow the consul container to access, other hosts, within the network.

Create an ECS service to run the tasks automatically. Once the tasks are active you should be able to view the consul dashboard by accessing the node IP on port 8500
http://ip:8500/

Once the cluster is created, the next step will be to create the task and service(consul-cluster-1 & consul-cluster-2) to run the consul agent.

Consul accepts configuration files in either JSON or HCl. This configuration is loaded in JSON since some of the attributes are dynamic and loaded directly from the host as the container starts up. Since we are running the Tasks in host mode we need to bind the consul agent IP address as the node Local IP.

The above configuration file registers two services i.e. users and activities as well as their sidecar services.

The sidecar service is initialized to run on envoy which is advised for a production use case this is done using the service registration bash script.

The Dockerfile to the agent is as below.

Below is a sample configuration file to supervisor, The service registration scripts are delayed by 30 secs to allow the agent initialization script time to execute.

This is the final step at least to allow traffic into the deployment. The Ingress Gateway will run as a service on its own cluster having its own agent. To do this we’ll define configuration files as below.

The ingress is configured to allow all traffic on port 80 to any service within the data centre. A request to a service can be made as shown below an extra header named Host is key to direct to the required service.

To make our work easier and avoid having to restart services every time an agent configuration is updated.

During the course of the explanation, a lot of configurations that would otherwise be run manually on the consul terminal have been defined within the various bash scripts attached to each agent.

To fully automate this Github actions can be used to directly trigger these updates.
The steps are as follows;

Below is a sample action file that implements the above-mentioned steps.

You should now have a basic idea of how the consul works. The information and demonstration provided in this guide is not exactly the only way to handle consul in production, Hashicorp has a multitude of other implementations.

This @repo has the full implementation of the content discussed within this tutorial, While the repo cannot be run using a one-liner(requires multiple configurations to work), it can act as a good reference to get you started with deploying consul.

That’s all. Feel free to raise any issues on Github.

Read More
AAPI
In this tutorial, we are going to look at how to secure your API credentials and make them…

Read More
AAPI
Introduction This is a prototype device for smart farming. The smart farm has a DHT11 sensor that measures…

Read More
AAPI
The ubiquity of cloud computing has reduced the barrier to entry for many web-scale use cases. Consider an…

Read More
AAPI
Introduction The project looks into how you can use Gmail as an Email Client for your website, this…

@DevsDecoded
282 Following
321 Followers
This series is a continuation from Part 1 Here: PART 2 (Upload Image to Storage Bucket and Reference path to RealT… https://t.co/50pW6TAIKS
yesterday
Introduction For a long time, HTTP (Hypertext Transfer Protocol) was responsible for communication between a clien… https://t.co/X51EkTgxhj
4 days ago
Introduction In this tutorial, we will be building a secure authentication system to log in and signup users with… https://t.co/HFKDAdE4zv
8 days ago
Introduction According to Wikipedia USSD (Unstructured Supplementary Service Data) is a communications protocol use… https://t.co/gclUw0MHlj
11 days ago
Design and development didn’t start with the dot com boom back in the 90s. Rather, when GUIs became a thing back in… https://t.co/4BNnWKBYxE
12 days ago
Follow
Total
1
Share
1
0
0
0
0
0